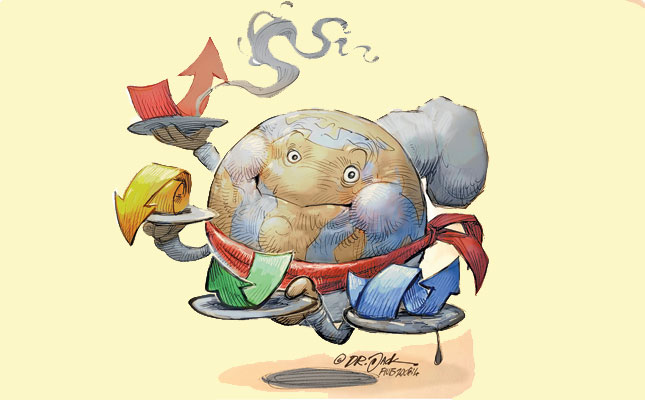 Over the coming decade, an expanding global population will remain the main growth factor driving food demand, although the consumption profiles and projected trends vary depending on the development status of individual countries.

On account of an expected 11% expansion in the global population between 2019 and 2029, as well as notable gains in per capita income in all regions, total consumption of food is expected to rise 15% by 2029, as measured on a calorie basis.

Shifts in protein demand
According to the ‘Agricultural Outlook 2020-2029’, per capita food expenditure will expand globally, but will decline as a share of income, most significantly in middle-income countries, due to the increase of per capita income in these countries.

In terms of consumption per category, the highest growth rate is projected for fats at 9%. Due to the ongoing transition in global diets towards higher consumption of animal products, fats and other foods, the share of staples in the food basket is projected to decline by 2029 for all income groups.

Differing income levels and varying income growth projections between countries will lead to diverging nutritional patterns over the coming decade. In particular, consumers in middle-income countries are expected to use their additional income to transform their diets from staples to higher-value products, such as animal-based proteins.

Environmental and health concerns in high-income countries are, however, expected to support a transition from animal-based protein towards alternative sources, as well as the more immediate substitution away from red meat, notably beef, towards poultry and fish.

The per capita food energy consumed in high-income countries will remain at current levels. Ongoing income growth and changing consumer preferences will further the substitution of staples, sweeteners and fats for higher-value foods, most importantly foods dense in micronutrient content such as fruits, vegetables, seeds and nuts and, to a lesser extent, animal products.

In upper-middle income countries, total food consumption is expected to expand by about 4% by 2029.

Based on the strong preferences for meat in many of these countries, 38% of the additional calories will be provided by animal products and 26% by fats and other foods. Consumers in lower-middle income countries are projected to increase their food consumption by 7% over the coming decade, the largest gain of all four income groups.

However, due to limited disposable income, fats and staples will still account for half of the increase, while the growth in the consumption of relatively more expensive options such as fruits, vegetables and animal products will remain limited. Average diets in low-income countries remain heavily based on staples, which will continue to provide 70% of daily calories.

Over the outlook period, global livestock production is expected to expand 14%, supported by low feed and stable product prices, ensuring remunerative profit margins for producers. Poultry remains the fastest-growing meat, accounting for about half of the projected increase in total meat output.

Sub-Saharan Africa
The demographic and economic growth profile of sub-Saharan Africa is unique among the six regions covered by the report. Population growth is highest, and while urbanisation has been growing quickly, it remains by far the lowest among the regions.

The region is anticipated to add some 329 million people by 2029 compared with the 2017/2019 base period, growing at over 2,5% per year, and while almost two-thirds of that addition will be urban, 55% of the population will still live in rural areas by 2029.

Agriculture, fish and forestry account for about 16% of GDP, and this is expected to decrease to around 13% by 2029. Per capita economic growth is anticipated not to be as robust as in emerging developing countries, expanding by 1,3% per year over the outlook period.

Average cereal yields across the region are projected to grow 16% over the outlook period, at about the same rate as the last 10 years, based on investments in locally adapted improved crop varieties and optimised management practices.

Although rapid growth in yields will help narrow the region’s gap in terms of yields achieved in the rest of the world, which, on average, is more than twice that achieved in sub-Saharan Africa, fully closing the yield gap will remain a challenge given limited use of inputs, irrigation and poor farm infrastructure.

Sub-Saharan Africa is an agro-ecologically diverse, land-abundant region, accounting for 14% of global cropland and 21% of pasture.

Nonetheless, the agriculture sector in many countries faces land shortages given high population density in rural areas, such that most available land is concentrated in few countries and/or is largely under forest cover.

The region thus produced only 7% of the global value of agricultural and fish production in 2017/2019. Overall, sub-Saharan Africa’s self-sufficiency for major food commodities is decreasing, as the region’s population is expanding quickly, beyond the pace of growth in domestic supply, which will see import dependence deepen over the next 10 years.

The region concentrates most of the world’s poor and undernourished individuals. Even though calorie intake (kcal)/person/ day is expected to increase across the region, it will remain the lowest in the world, increasing about 75 kcal/person/day over the outlook period, to reach about 2 510 kcal/person/ day in 2029, compared with the projected world average of 3 014 kcal/person/day.

Most basic food commodities in the region are produced for domestic consumption, rather than exports, as the region increasingly relies on imports to close the gap between domestic production and consumption.

Import volumes of cereals, meat, sugar and oils are rising. Apart from sugar, imports are growing at a faster rate than production or exports. In fact, exports are decreasing for nearly all main commodities.

The COVID-19 effect
The economic, social and political fallout of the COVID-19 pandemic is evolving in extremely complex patterns. An initial COVID-19 scenario presented in the report provides some preliminary insights into the short-term impacts of the current pandemic on agricultural markets.

The scenario illustrates how the COVID-19 pandemic could create a historically significant market shock.

In this scenario, agricultural prices fall strongly in response to the COVID- 19-induced decline in disposable income, especially in low-income countries. Due to the unprecedented loss in purchasing power, consumer food consumption will decrease despite the offsetting price declines.

Supply-side reaction to this reduction in demand will be delayed as production decisions, such as the planting of crops, were made prior to the onset of the COVID-19 pandemic, leading to an oversupply of many agricultural commodities in the short run.

The initial scenario shows a contraction of demand for vegetable oil and animal products, whereas the demand for staple food was less affected. All these factors will contribute to lower agricultural commodity prices.

However, additional aspects would need to be assessed in order to provide a more complete picture of the effect of the pandemic.

These include structural changes to food demand, policy measures affecting national and global food chains, and the depth and length of the macroeconomic shock and the recovery path.

The views expressed in our weekly opinion piece do not necessarily reflect those of Farmer’s Weekly.

The Agricultural Outlook 2020-2029 is a collaborative effort of the Organisation for Economic Co-operation and Development and the Food and Agriculture Organization of the United Nations. It provides a consensus assessment of the 10-year prospects for agricultural markets at national, regional and global levels. To read the full report, visit www.oecd-ilibrary.org.