How to improve seedling trays 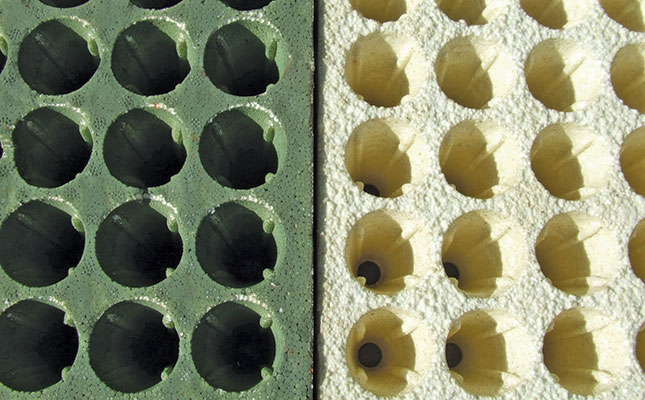 The more pellets that are placed in the mould, the denser and stronger the seedling tray.
In cheaper trays, there tend to be slightly bigger gaps between the expanded pellets, and fine plant roots can enter these, making it difficult to pull out the plants.

Damping off organisms can also lurk in these small spaces, and the growing plants can become infected and die. One of the Pythium species (fungus-type pathogens) is usually the main culprit, but it’s not the only one.

I have used horse manure compost as a medium for 23 years and have never had damping off problems. This may be because the medium is a rich source of beneficial organisms, which suppress development of pathogens. I also never get powdery mildew on Brassica seedlings.

Once the pathogen has appeared, the trays must be sterilised, or the problem will keep cropping up and possibly cause major losses.

The most effective way of sterilising trays is in a heat chamber. To save cost and effort, some growers wait until damping off starts before using heat sterilising.

Another solution is to use a commercial dip containing copper; this will also reduce the penetration of roots into the fine gaps in the polystyrene.

If you are a small grower, you can use a simple, home-made steriliser such as bleach mixed with water at a 10% solution, or hydrogen peroxide at 3% concentration. Leave the trays suspended in the solution for 20 minutes, then rinse and dry them.

The ideal sealant
One of the most effective ways of treating seedling trays is to dip them in a water-based roof paint when they are still new.

Obtain a flat receptacle slightly larger than the tray and dilute the paint with 10% water. Push the tray face down into the paint until the paint reaches the drainage holes. Lift and allow the excess paint to drip back into the tray, then place it face-up to dry. (It’s unnecessary to paint the base.) You should be able to coat about 10 trays per litre.

Some farmers are put off by the price of paint, but this treatment is well worth the cost: not only does it extend the life of the trays by many years, but it seals the fine gaps in the polystyrene.

This reduces the risk of pathogens lurking in these crevices and also makes it much easier to pull out the seedlings.

Roof paints come in many colours, so you can use different colours for different years to keep track of the lifespan of each batch of trays. There are often specials on roof paints and you can take advantage of these to cut the costs of the treatment.

Tested
To determine the benefit of this treatment, I placed a treated and an untreated tray next to each other on a shed roof to expose them to the elements and accelerate ageing. The difference after a time was remarkable.

I also convinced a large seedling grower to treat a batch and see for himself. Years later, he showed me the treated and untreated trays; again, the difference was dramatic.
Bill Kerr is a vegetable specialist and breeder.